I’ve been encouraged countless times by you people to get into the Pogues. I just might do it now.

And a song I’ve had on repeat for a little bit. How did I miss Lisa Hannigan?

Anyway, thanks for the heads-up, Aashish! 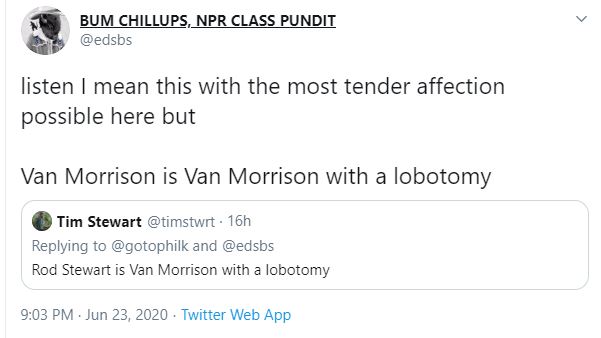 YouTube’s algorithms recently presented me with a Late Late Show installment featuring Shane MacGowan, along with a room full of famous friends, family and collaborators.

The tribute is framed as a sort of after-hours jolly at Tubridy Tavern. Pint glasses and candles are set on tables; in the backdrop looms an image of the Brooklyn Bridge (in reference to Fairytale, obviously).

Aidan Gillen recalls MacGowan’s music speaking to him when he was a young actor living in London. Glen Hansard remembers when growing up in Ballymun, the Pogues and Bob Marley were on everyone’s mix-tape (and duets on A Rainy Night In Soho with Lisa O’Neill). There are video eulogies from Bobby Gillespie of Primal Scream, actor Tom Vaughan-Lawlor and Paul Simon (apparently taping his piece on a golf course in the midst of a hurricane – so bravo for that).

I was surprised to learn that pneumonia and a fractured pelvis led to MacGowan’s sobriety in 2015. And even though he has teeth again, holy shit does he look (and sound) awfully fragile in his wheelchair at the tender age of 62.

Anyway, all this heaped praise reminded me of Hell’s Ditch, the only Pogues album I’ve ever owned. I’m getting reacquainted with it today and thought I’d share with you bastards. Enjoy or don’t.

Stepped over bodies in Bombay
Trying to make it to the U.S.A.
Ended up in Nepal
Up on a roof with nothing at all
And I knew that day
I was going to stay
Right where I am, on the sunnyside of the street

Been in a palace, and I been in a jail
I just don’t want to be reborn a snail
Just want to spend eternity
Right where I am, on the sunnyside of the street

Gots to get me some of that de-aging technology.