I’ve posted twice on them. Here’s a third. They excel at hooks, often recycled 60’s girl group ones. Who cares? Not I. Two albums, Cults and Static, are worth playing all the way through. I think I was underwhelmed by the others, but I sampled them quickly so could have misjudged.

If you’ve ever wondered why there are a thousand different recordings of some music, here’s Leonard Bernstein showing why: there are a thousand different ways to play it. Printed music can only tell you so much. Of course, some of those thousand recordings are copying one another, but with these guys you always got something unique. They had their off days like anyone, but when they were on…

Samuel Mariño is a rarity in opera: a true male soprano.

Rather than relying on falsetto as a countertenor would, Mariño, 28, is able to comfortably sing high notes with his chest voice. Now he is branching out from Baroque parts originally written for castrati.

“The teachers were trying to treat me as a countertenor. I had to sing lower when I could sing much higher. Being a countertenor is an established thing, and they were trying to put me into that box. Then, in 2017, I met Barbara Bonney. A friend told me that I sing very much like her. I wrote to her and said: “Hi. I’m Samuel and I want to take lessons with you.” I went to Salzburg, Austria, and Barbara was like a fairy godmother. She told me to sing how I speak, to just put notes to my speaking voice. And that is what I do today.”

Your new album starts with a famous Mozart aria written for a woman who is playing a man. What do you bring to the role as a male singer?

“My voice is a light lyric soprano, with a bit of coloratura. In the score, Cherubino is a soprano role, but today it’s for mezzo-sopranos and their male-ish colors. If you talk to any mezzo, they will tell you it’s very hard to sing Cherubino, because it’s quite high — not super high notes, but sitting all the time in a high tessitura. Cherubino is a young teenager, and I do him as a boy who is innocent and confused. It’s a totally different vision of how the role can be sung.”

I’ve posted a Nazz song or two here and there. Was about to blargh more substantially about them, then I ran across this video, a decent overview. First I’ve heard of this YouTuber, but apparently he does a lot of these on various bands.

Not Wrong Long always reminds me of Hot Burrito #2. Both released the same year, ’68. Coincidence? Who knows? Who cares?

Rhino released a cool red vinyl Nazz Nazz some years ago (seen on the turntable in video). Not hard to find.

Hard to believe, but Up The Bracket turns twenty this year. If a better album’s come out since, I haven’t heard it.

…I attended this show, age 12. Upon walking in the coliseum, I asked “what’s that smell?” “That’s pot, you idiot,” replied my friend, who apparently ran with a faster crowd.

It was quite a show, with generous use of a theremin during Heartbreaker and Whole Lotta Love. I’ll admit to getting bored with some of the longer ones, but much of it was stunning. Anyway, you can forgive them for overdoing it, because they loved to play and no one was playing better at the time (I doubt if they ever played as well as they did during these early years; they were clearly not as good by the time they made their concert movie, I think in ’73). They were pumped about playing here, you can hear Robert Plant announce that just before they begin. They’d spent much of the day scoring local rockabilly and blues records that were rare elsewhere, something you could still do fairly easily in Memphis back then.

However, as good as the show was and as well as they played, they did not depart on good terms. The police got very antsy and interrupted them during the last long medley (based around How Many More Times but including Tobacco Road, Honey Bee, and also Memphis TN and That’s Alright Mamma for the occasion) and kept harrassing them to get the crowd to sit down. This was still the era of violent Viet Nam protests, and the cops were just nervous. Before the encore you can hear Plant, at the behest of the police, beg the crowd to sit before a policeman chimes in. Plant obviously didn’t care about the crowd standing, but the band was under threat of arrest at that point. Then Page lashes out the first chords of Whole Lotta Love and the place goes bonkers again. The police had ordered all the house lights turned on during How Many More Times; they just wanted people to leave. But of course no one did, because the band was at full throttle.

Meanwhile, backstage, the promoter was afraid the authorities would ban him from ever staging another show in Memphis, so he pointed a gun at Peter Grant to try to make him stop the show. Grant called his bluff and reportedly looked him square in the eye and said “ya can’t shoot me, ya cunt. They gave us the key to the fuckin’ city.” And they had. Prior to their arrival, Mayor Loeb decided to award an official key “to that Led Zeppelin feller who can sell out the coliseum in an hour” (a record at the time). When the mayor saw their hair, he regretted the decision, but ever the southern gentleman, proceeded anyway in a short, awkward meeting the afternoon of the show.

As for me, I got grounded a few weeks for attending. The newspaper reported the widespread pot use and trouble with the police. When I’d asked permission to go, I said LZ were sort of like the Partridge Family. I had no idea they reviewed rock concerts in the newspapers. It was worth the grounding. I don’t think I saw such an exciting culture clash until the Sex Pistols came through in early ’78.

This tour was in support of Led Zeppelin II. The Memphis date came a few months after the legendary Royal Albert Hall show, so the set is similar but mostly better. They’d toured extensively in between, so they’d perfected it on the road by the time they got to Memphis. Just one of many examples: here’s the RAH version of their opener, “We’re Gonna Groove,” and here’s the Memphis one. Page had added some great guitar fills, and then there’s the extra funk groove in the middle. 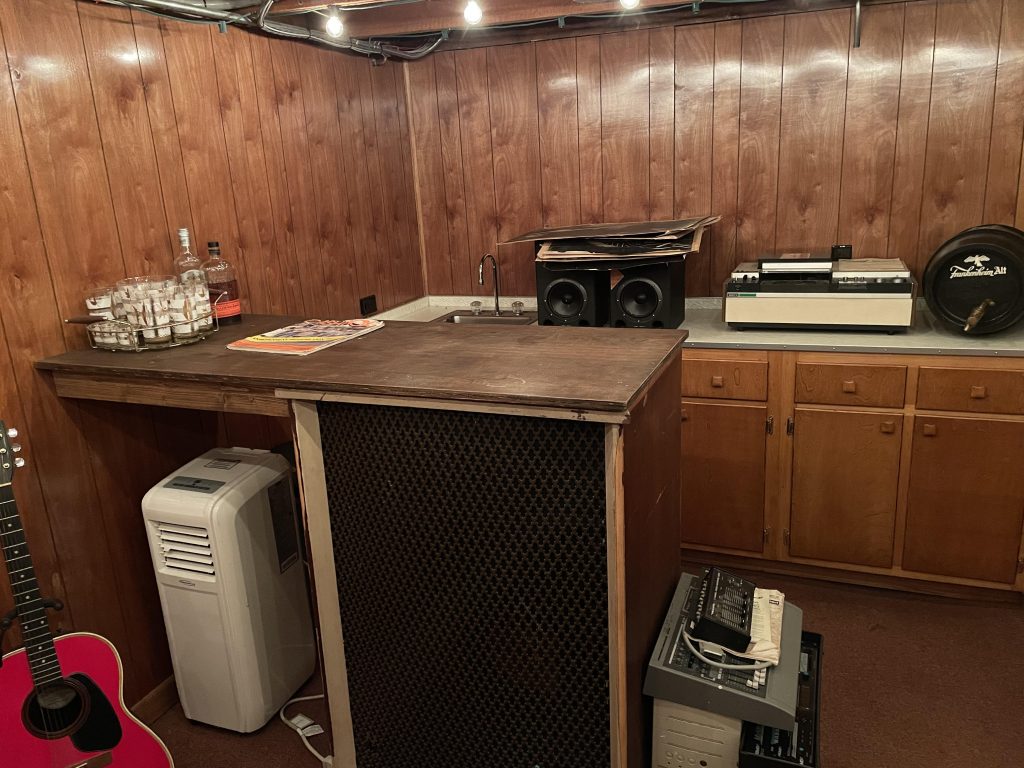 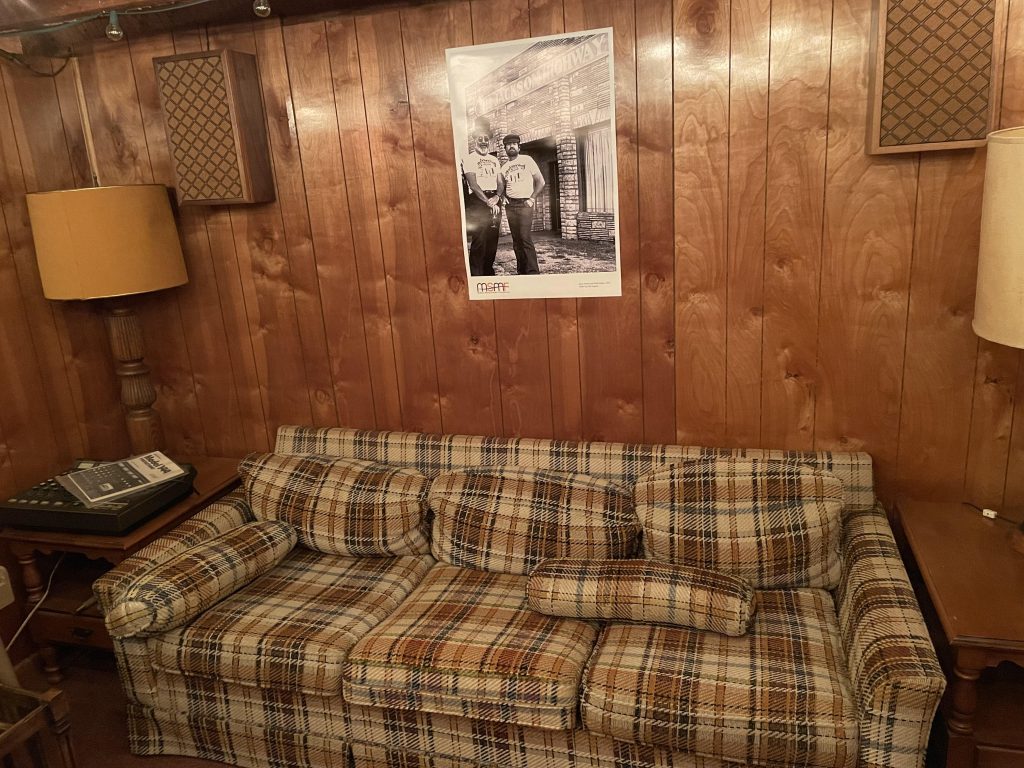 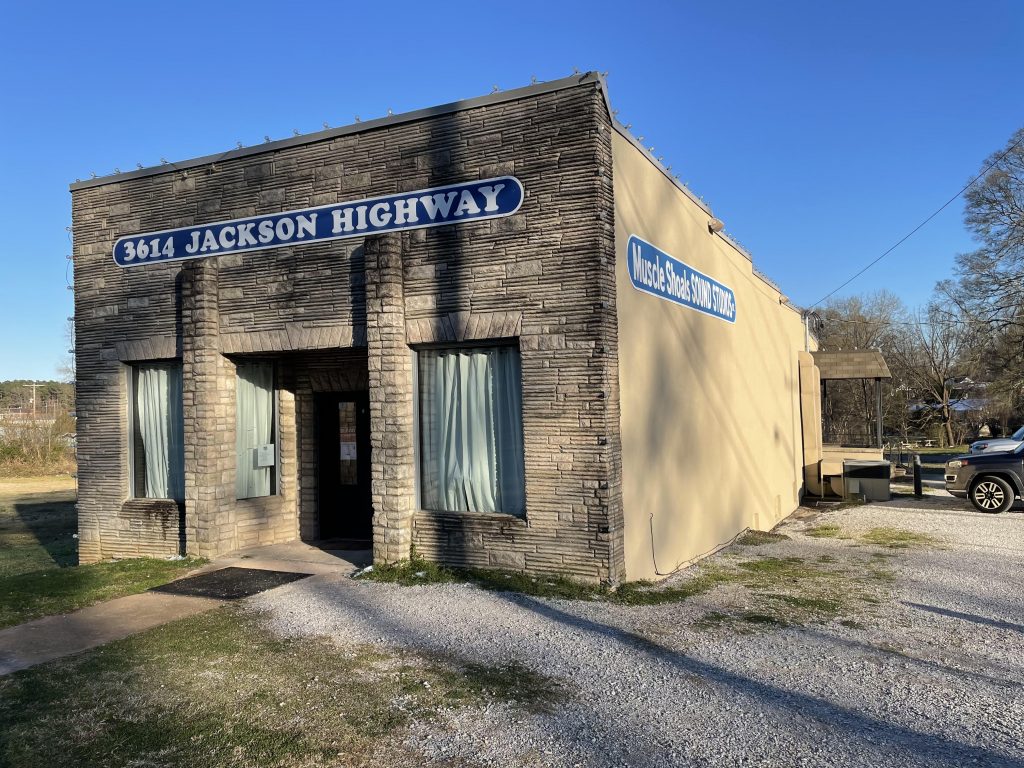 Last weekend I visited Muscle Shoals Sound Studios. Above is a hidden bar accessed via a panelling cut-out. The county was dry back in the day, so it had to be hidden. Twenty-mile drive to the Tennessee state line for restocking. That’s an old video player on the counter for, um, “films.” Original furnshings. The picture on the wall is of Jerry Wexler and Willie Nelson. Some huge talent relaxed in that little room, along with the Swampers, of course. I still find it very funny that musicians came from all over the planet to work with those “black musicians” who played on Staples Singers and Wilson Pickett (and 100 others) records, just to find four white guys who looked like they worked at the local Tractor Supply.

An interesing fact (of many) about that dumpy little building: it’s slightly twisted. No parallel surfaces, so no standing waves. You can place a mike pretty much anywhere without issues.

The tour guide was knowledgeable. Unlike a few years ago when I toured nearby Fame Studios (where the Swampers worked for Rick Hall before striking out on their own). The guide was a young ignoramus whom I tormented with corrections and questions. Sorry, but if I’m paying for a tour, the guide should know more about the place than I do.

While no one’s paying attention, I’ll slip in another elitist post. I went to see this ensemble last night, and it was a smoker of a performance of Schubert, Bartok, and Beethoven Op. 131. I think these groups relax and take more risks when playing in backwater towns like Memphis, and the results are often tremendous. The cellist might look like an assistant night manager at Kroger, but musically he’s a badass; he was pushing them all to the brink in the Beethoven. Here they are in 2nd mvmt. of Beethoven Op.135. I’ve said it here before, and I’ll say it again: the late Beethoven string quartets and piano sonatas, at 200 years old, are still ahead of the times.